Thinking About Moving To Tampa? 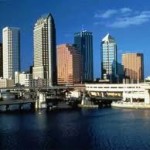 The Gulf coast of Florida is known for its miles of white sandy beaches, and beautiful blue waters, but it can be really difficult choosing which part of the Florida West Coast will be the best place for you to call home. There are over 770 miles of great coastline to choose from, and each mile is just as beautiful as the next. How can you possibly make a choice? Movers.net has gone to work for you once again. We have asked our users which area on the Florida West coast they like the best, and the most popular choice was the city of Tampa. Is Tampa right for you? Keep reading to find out.

The facts about Tampa

Tampa sits on Tampa Bay. It is one of the largest ports in the entire state of Florida. It is home to the Tampa Bay Buccaneers, an NFL football team, and it is also home to a wide range of other sports teams as well.

Before the city of Tampa existed, the area was military fort for the United States Army. This was in 1824. Like most of Florida at this time, the addition of railroad tracks made a huge change to the city. The railroad tracks helped the city grow by bringing in more industries, one of which was the cigar manufacturing industry.

Tampa has been voted by Forbes as the 5th best outdoor city in the entire United States. It is now known all over the world, and it is constantly growing. The population of the city itself is right around 350,000 people. If you include some of the other surrounding cities like Clearwater, and St Petersburg, the population grows to over 2.5 million people. It seems that everyone is interested in living in Tampa.

Can you afford to live in Tampa

The cost of living in Tampa seems to be really close to the rest of the country. You can expect it pay just over $2.00 for a loaf of bread, and a dozen eggs will cost you just under two bucks a dozen. Apples and Oranges will cost around $1.25 per pound. You can expect to pay around $4.00 per pound for fresh poultry.

Is Tampa the right city for you? These city facts should help you make a better decision. If you are still uncertain, the best thing to do is take a vacation to the city of Tampa. You may find its charm irresistible.